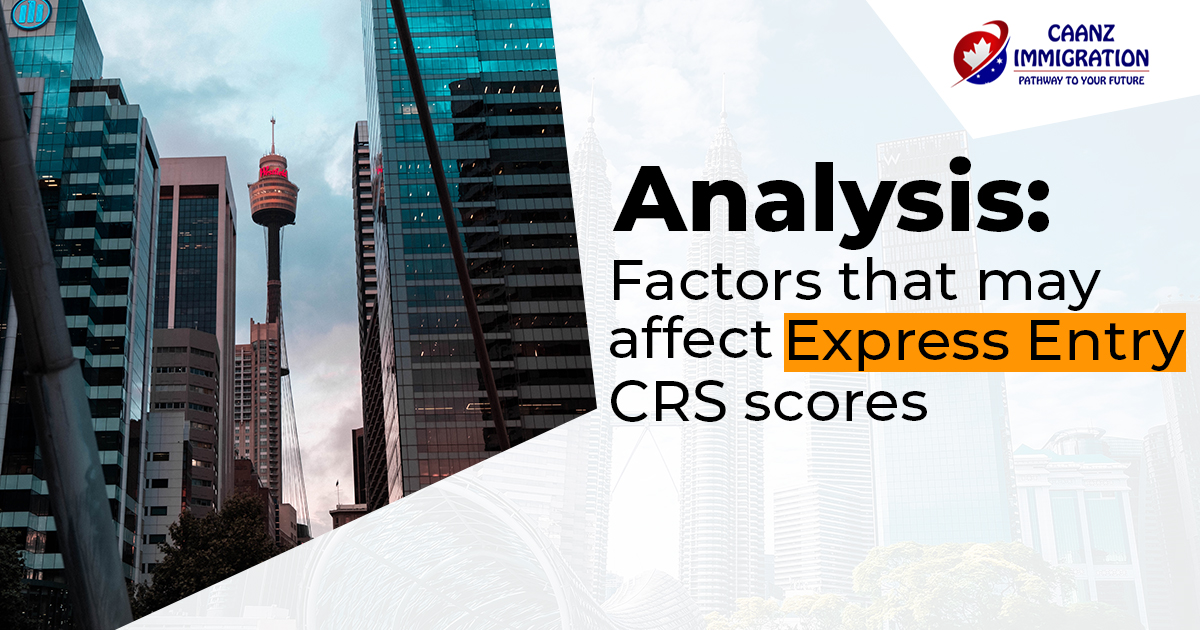 Candidates for immigration who entered the Express Entry pool are ranked against one another using the Comprehensive Ranking System (CRS). Only the top applicants are awarded an invitation to apply (ITA) for Canadian permanent residency. The Canadian government uses a merit-based points system to rank Express Entry pool applicants in order of preference. The score given to each candidate based on this scale is also referred to as their “CRS score,” after the system’s official moniker, the Comprehensive Ranking System.

As of July 6, Canada is once again holding draws for all Express Entry programmes. Since then, the number of Invitations to Apply (ITAs) distributed weekly has increased by 250, resulting in lower minimum scores required to be achieved in the Comprehensive Ranking System (CRS). The minimum passing score is still far above average, though. Candidates for the most recent Express Entry lottery needed a score of 533 or above. Candidates with this kind of ITA would have to be young, well-educated, have substantial job experience, and possibly be bilingual.

The CRS threshold tends to decrease in tandem with the number of Express Entry candidates invited by Immigration, Refugees, and Citizenship Canada (IRCC). Due in part to pent-up demand, however, there are currently a substantial number of Express Entry candidates in the pool with scores above 501. Since December 2020, IRCC has suspended draws for the Federal Skilled Worker Program (FSWP), and since September 2021, it has suspended draws for the Canadian Experience Class (CEC). As there were no draws inviting people with scores above 501 to apply, the pool of applicants with these scores increased. Express Entry applications are active for a maximum of 12 months.

As a result, there are now many more qualified people to choose from than there were before the outbreak. A total of about 21,900 Express Entry hopefuls with scores between 450 and 600 were in the pool on March 3, 2020, the last draw before COVID-19 was declared a pandemic. At the draw held on August 3, 2022, 66,813 Express Entry applicants were in the same position. According to the most up-to-date data accessible on the government website, there are around 8,975 Express Entry candidates with scores between 501 and 600. There were fewer applicants in this bracket for the Express Entry lottery on July 20, but more than on July 6. This may imply that more applicants with high CRS scores are entering the pool, but not quickly enough to keep the cutoff from decreasing.

The potential for a poor CRS score also depends on the proportion of PNP applicants. The provincial governments are responsible for allocating these positions. The time it takes for a province to process a nomination application and for an Express Entry candidate to react to a nomination application invitation are both variables. The increase of 250 ITAs each draw in the most recent three draws has been sufficient to balance out the influx of new Express Entry and PNP candidates. Consequently, the CRS score has kept falling. The 5,000-person ITA draw we saw in December 2020 will be reached in 30 weeks if IRCC keeps increasing the number of ITAs by 250 every two weeks. As of the 8th of March, 2023. Between January 8th and March 4th of 2020, there were an average of 3,700 ITAs distributed in each draw. If IRCC continues to grow its draws at the same rate, it will take until December 28, 2022 to reach this level.

Of course, IRCC is under no obligation to perform draws every two weeks, and the department may make such changes to invitations as it sees fit. As has been the case throughout the pandemic, the department’s ability to meet its processing threshold of completing 80% of applications within six months and the multi-year immigration levels plan will determine the amount of invites given. In 2022, IRCC anticipates receiving around 55,900 Express Entry applications. Notes from internal briefings indicate that this number includes individuals currently waiting in the immigration queue.

However, the 75,750 anticipated in 2023 will likely include additional Express Entry applications. To apply for permanent residency, ITA holders have 60 days from the date they received their invitation from IRCC; however, the agency may take up to six months to process the application. In 2024, the goal for Express Entry will increase to 111,500, which is on pace with annual goals set in 2021.

When working to reduce your CRS score and earn an ITA, it’s important to take into account the following conditions: The IRCC does not preemptively release their draw strategies. At its discretion, it can hold draws whenever convenient and determine draw sizes independently of any external factors. However, the Express Entry targets in the immigration levels plan, which will be revised as of November 1, can affect the magnitude of the draws. As more invites are sent out, the CRS score tends to decrease. Score thresholds may change, however, if there are more PNP applicants or more highly qualified Express Entry applicants. Because all-program drawings were put on hold for 18 months, there is a larger-than-usual number of applicants with scores above 501.

It wasn’t until July that IRCC resumed draws, once the department’s backlog of applications was reduced to an acceptable level. It is envisaged that applications from candidates who are invited to apply will be handled within six months. Early in 2023, IRCC will likely begin conducting draws with an economic focus, such as a specific occupation, language proficiency, or other aspect. Therefore, it is possible that factors other than CRS scores and types of programmes will be used to determine who receives an ITA.

In addition, according to a resolution proposed by Randeep Sarai, the member of parliament for Surrey Centre, British Columbia, Immigration Minister Sean Fraser has until September 8 to present a proposal on how to give more weight to in-Canada job experience under economic immigration programmes. Fraser is tasked with “Expanding paths to Permanent Residence for international students and temporary foreign workers through the Express Entry system” under the minister’s mandate letter presented in December. In an interview with CIC News published in June, the minister clarified that this does not automatically result in candidates receiving extra points in the Express Entry system.

With this opportunity, Fraser believes, “we should be able to give some clarity as to what these pathways may look like over the coming number of months,” he said. The provinces of Canada have also made calls for increased immigration authority. Alberta, Saskatchewan, Manitoba, and Ontario’s immigration ministers all signed a letter calling for more autonomy in the country’s immigration system. Both Saskatchewan and Ontario are asking greater authority over immigration and more nominations to invite immigration candidates. If these efforts are fruitful, Express Entry applicants may have even more doors opened to them in the PNP.